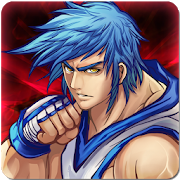 Description of Kung Fu Do Fighting [190]

Kung Fu Do Fighting [190] updated on Friday October 2, 2020 is the Arcade for Android developed by WaGame

==Description
Kung Fu Do Fighting, is the action game of fighting. The world’s largest fighting contest is started! No ranking, no rules, only dead or alive! Now, a new powerful character appears. The typhoon devil is a NINJA master from Japan and he swears to beat everyone soon. The other contestants include the peerless master of Taekwondo 10 paragraphs, the Mauy Thai Hurricane Death, the Dark Boxing King, the Vicious Beauty Killer and the President X with mysterious assassination skill. Each one for survival and honor must start the toughest fighting. Who is the strongest fighter on the earth?
This action game includes two play modes：
Tournament mode：The player selects own character at first and then enemy appears in random. It is a three point match. The first competitor to score two points therefore wins the match. If there is a draw (both life value is 0), the round will play again.
Survival mode：The player chooses own character at first. The enemy character will be decided randomly. There are no end in a winning game set. The winner’s each play will not stop, round and round.