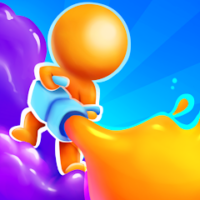 Dye Hard is a PvP game where you have to paint everything around and defeat your opponents!

Grab a paint gun and an unlimited amount of dye! Capture enemy towers and bases with your team. Dye the entire territory without leaving a single blank spot!

There are three teams varying by a color of paint: red, blue, and yellow. Each team on the map has its own base, and paint-shooting towers. Your task is to capture enemy structures by drowning opponents and the battlefield in paint!

You can paint over everything around without limits, the dye never ends! In places where the paint of your team’s color is spilled, you can dive into it, and move much faster, restoring health!

Dye Hard is a colorful game with exciting paint fights! Dye everything you see around you, drown your rivals in paint, and capture enemy bases!