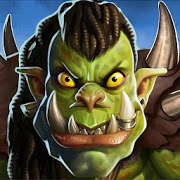 Warlords of Aternum [1.25.0] updated on Tuesday January 4, 2022 is the Strategy for Android developed by InnoGames GmbH

Meet your enemies on the battlefield, and put your tactics to the test. Recruit, train and build your army to battle and conquer every opponent in this turn-based strategy game.

Collect and recruit dozens of units to turn your regiments from a handful of militia into a steeled fighting force. Equip and customize each unit, develop weapons and armor, and master game-changing abilities.

Compete in intense PVP battles against the Warlords of Aternum community and climb to the top of the leaderboards. Do you have what it takes to become a true Warlord?

🔷 JOIN THE FIGHT
Take on the orc horde, roaming bandits and fellow warlords in challenging turn-based PvE or PvP battles

🔷 YOUR MOVE, YOUR VICTORY
Make the right tactical decisions to dominate intense 3D animated combat on the hexagonal battlefield

⚔️ Are you ready to join the fight? ⚔️

- The Xatakan story in the Tavern can now be completed with just 4 regiments!

- Some faction stories got adjusted to be even more entertaining.

- Important points on the map will now react to zooming in and out, and adjust their display for better readability.

- The possibility to view ads in the game has been retired. Instead, we are putting a cap on the heal time, which will now be 1 hour, making the game more fluent for everybody!