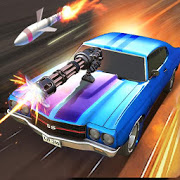 Death Race Road Battle [Varies with device] updated on Tuesday September 29, 2020 is the Racing for Android developed by Glad Games

Become the mad max driver and a furious racer in this traffic shooting game where can chase, shoot and destruct your rival’s vehicles in the realistic city roads, deserts, forest areas, highways, and snow.

Experience the deadliest car destruction racing ever with lethal weapons and intense chasing. Obtain terrifically top speed to crash and burn the traffic rivals. No speed limits and no mercy just shoot and fire the vehicles ahead of you, don’t let others slow you down!
Elimination has never been so evident as you feel your car parts are getting burnt and destroyed.
Test yourself to get top ratings to earn rewards on your way with our Death Race Road Battle.