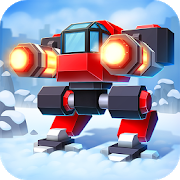 MechCom 3 is a real-time strategy game. Set up new bases, collect resources and design your own mechs to crush the enemy. The game keeps everything you like in the previous instalments while adding new mechanics and improvements.

Intro:
In XXII century multinational corporations have grown to rival governments of the world. The most powerful of them explore space for valuable resources. Expansion into the Sigma Galaxy has revealed a bounty worthy of executives’ attention. You are a distinguished military commander going to join one of the corporations in a conflict for the Sigma Galaxy.

Good luck and have fun!

• Some fixes and improvements