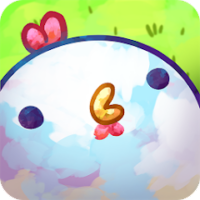 Chichens [1.13] updated on Friday November 4, 2022 is the Simulation, Idle, Casual for Android developed by HyperBeard

Descriptions :
Chichens is a perfect choice for those looking for light entertainment or those who want to kill time with a cute game during their free time. It won’t disappoint players because once they get lost in the world of cute creatures in the game, they won’t want to get out. It’s a fun game with fun graphics, and everyone will always be preoccupied with the beautiful things around them.
Chicken
VERY FUN PLAY
Chichens walks you through everything to help you get used to the gameplay, but it’s not overly complicated as you only need a few taps to experience all of the game’s features. In the beginning, you will be taken to a forest, and an adorable chick will be waiting for you on the green grass. All you have to do is tap the chicken repeatedly to fill up the egg-shaped energy bar at the top of the screen. If you touch the chicken, it will start walking around, but keep touching it until it fills the energy bar.
When it’s really full, that energy turns into an egg that appears on the screen and you touch it to see what appears inside. Sure enough, it’s a different chick, and it’s brought onto the lawn with your original chick. So your task will be to create a place with many different chickens by touching them to create a new egg. Sometimes, upon impact, a chicken suddenly falls asleep and you can no longer touch that chicken, but you have to switch to another chicken. Not only does it generate energy to fill the bar, but touching it will drop coins for you to collect.
DISCOVER PLAYFUL CREATURES
When it comes to chickens you probably think it will be like real life but just the animated version just won’t be as real as you think when it comes to this game. In addition to the chickens that initially look quite normal, the later the eggs hatch, unusual and funny chickens emerge. They will still have a face resembling a chicken, but it will be a different animal or sometimes object in terms of body shape.
Sometimes you will encounter the egg hatching the image of a spider but the face is that of a chicken or a leaf but still the face of a chicken. You’ll probably have a laugh because they’re pretty funny, but undeniably still very cute. When they hatch, they’re mostly small tiny creatures, but after a while you can raise them by using the coins you earn to buy them food.
SOME FUNNY THINGS IN THE GAME
There will be locations other than the current forest that you can explore if you collect enough creatures that the game needs to be able to unlock the next location. There will be 20 squares in total, with each square being a different creature that you must collect each time the egg hatches. It’s not always that the egg spawns a new creature that can hatch the creatures you already have, but don’t worry, just be patient and you’ll quickly fill up the remaining cells.
In addition, the game also has a mini-game for more entertainment, and the rewards are cute hats that you can decorate your creatures with. You choose any chicken that you have to put in a race with other opponents. Whoever gets to the finish line first gets a reward, and if they get 2nd or 3rd place, they get nothing. The trick here is that you should level up your chicken to run faster.
As a fan of cute and funny, you cannot ignore Chichens as it brings moments of extremely refreshing entertainment and laughter throughout the game. Get ready to build a world with your own adorable chickens and take care of them like your own.
Features :
Pictures of chickens are designed very cute and funny.
It’s easy to get used to some controls and play after just a few steps of the guide.
Suitable for stress relief and light entertainment.
Discover many different creatures that are both strange and adorable.
Entertainment with simple mini-games but nice rewards.
Last words about Chichens
If you don’t want to download the APK version of Chichens mod, you can also just download the Chichens APK in APKCAP. APKCAP will update Chichens APK version in no time. Users can easily update Chichen’s APK without downloading Google Play.

How to Download and Install Chichens?
First, click the download button, the APK file will be downloaded automatically.
Locate the downloaded APK file in your phone’s Downloads folder and open it to install.
Go to your mobile settings, click Security, then Unknown Resources.
Now open the app and enjoy.

Look! It’s a chichen! Tap it. Again. Tap it again. Don’t stop tapping. Oh wait. They are sleepy now. You probably should have stopped tapping, but don’t worry, it will be okay.

Oh look! It’s an egg. Let’s hatch it. I wonder what kind of chichen is inside. Could it be a pizza chichen?! Maybe a double-headed chichen??? OMG could it be the KleptoCat chichen?!?!? Fingers crossed!

Chichens are cute, silly little critters that go insane when you tap them and drop all sorts of fun things.

Fill each world with chichens and unlock the next one. You never know what these silly Chichens are going to do!

Chichens are super cute! Tap them. Hatch them. Watch them do silly things!