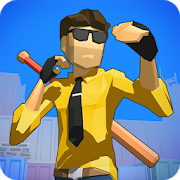 City Fighter vs Street Gang [2.0.9] updated on Saturday May 30, 2020 is the Action for Android developed by Game Theory Games

Description:
City Fighter vs Street Gang – an exciting action game in the tradition of classic beat’em-up projects. The protagonist returns home and discovers that the entire orange juice supply has been stolen. And this is clearly made by the street crime advocates who shoot under the windows all day long. Players begin systematically punishing villains with a large arsenal of potential impact and ease of use.
Features:
* Seven unique characters with different combat moves
* Many different gangsters and bosses to fight
* Quality graphics and smooth gameplay
* Retro game
* Discover different combination skills
* Simple controls

A crime fighting warrior wants to drink orange juice but someone broke into his house and stole all his juices. He finds out that The Street Gang stole all the juices around the world for their boss. He must fight against gangsters, mafias, robbers and thieves to get his orange juices back. Help him out?

City Fighter vs Street Gang is a fun, excellent retro fighting action game where you can show off your special fighting styles and skills like karate, Kung Fu, Muay Thai, Kickboxing and boxing to the Street Gang. You will see how to fight hand to hand, unarmed, with your punches and kicks how to use yourself with amazing skill to block the enemy kicks and punches.

Don’t underestimate them though! They are powerful street fighters. You are given many different defenses and attack techniques to help you like punching, kicking, catching, throwing, and dodge. It’s up to you to punch, kick, smash and knock them all out. Rage is on! Stick to your guns and prepare for a ruthless battle in city mayhem.
You must be a superhero to get back your orange juice against bad guys like prisoner, gangster and mafia in this amazing game. You will survive in this battle and become a champion. With this real fighting experience, you will be surprised. 3D animation graphics make you feel like inside the game. Street fight will be your best game between all the fighting games and unlimited action will surround you.

Open boxes to discover and equip new weapons and eat bananas to gain more strength. Collect oranges from gangsters and unlock new warriors. You can pick up varied weapons and equipment to strike the enemies from the ground.

You can play with Arya, Hitman, Jason and more. They are all martial arts masters who have different fighting styles and powers. Choose wisely!

The combat never ends. Boss challenges and gang beasts await. Beat the gang and bosses to put an end to injustice.

Battle Royale begins. Survive all the levels and reach your beloved oranges. Feel the real fighting experience and become a hero.

Thank you for playing the game