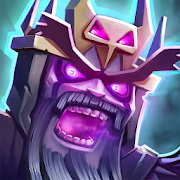 Descriptions :
Dungeon Boss Strategy RPG – Here we are In-Chief are the heroes of the team and their behavior in a mysterious and frightening dungeon. Collect your team of characters and be captivated Let yourself be escorted to hidden dungeons, waiting for us all kinds of monsters and mighty bosses. Complete the mission, many of which are available in this toy, and create the dungeon where we store their loot and all sorts of treasures. During the game Enhance your heroes by adding strength and skills and fighting with other players for the right to become the best. At the end of each dungeon, Bosses-invincible, the force with which we receive a reward, awaits us with value.
Features :
* Summon a mob of goblins, ninja assassins, majestic knights, and mythical beasts.
* Collect and upgrade awesome heroes and build your own teams to protect your dungeon.
* Rob the dungeons of your friends and enemies to steal their gold in battles. Get sweet revenge against other players who attack your dungeon!
* Explore many battlefields and fight with your teams in campaigns against fierce bosses.
* Summon the strongest champion of a friend in combat to get your team out of a jam and defeat the boss.

Battle to be the Boss in this turn based, strategy RPG! Collect and build teams of powerful fantasy heroes, upgrade their unique abilities to battle epic bosses, and defend your Dungeon from raids!

FEATURES:
• Summon a horde of goblin warriors, ninja assassins, majestic knights, and mythical beasts.
• Collect & upgrade fantastic heroes and build custom teams to guard your Dungeon.
• Raid the dungeons of your friends and foes to steal their gold in battles. Get sweet Revenge against other players who attack your dungeon!
• Explore many battlegrounds and take your teams to fight in campaigns against fierce bosses.
• Summon a friend’s strongest champion in battle to get your team out of a jam and take that boss down.
• Test your skills in the Tower of Pwnage, Challenge Mode, and if you dare, Boss Mode.
• Upgrade your gear and customize abilities by crafting runes.
• Journey through a special quest to unlock each hero’s Epic ability.
• Switch up your hero’s look with unique skins.
• Reap more rewards from new Events and Quests every week!
• Learn from other players’ strategies by watching battle Replays in My Dungeon.
• Fight with your Guild to conquer even bigger event challenges!

It’s Good to be the Boss!
If you’re enjoying battling in Dungeon Boss, please consider taking a moment to rate/review it.

“a simple but fun bite sized slice of RPGing.”-148Apps
“We can’t stop playing; it has us hooked!” – IGN Game Reviews
“a Triple-A-Quality title!” – VentureBeat