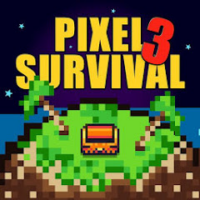 Descriptions :
Pixel Survival Game 3 – continuation of games of survival with pixel graphics. The protagonist goes to a desert island where he has to survive. It is necessary to build a reliable shelter, and find food and useful items. The user is a huge location where you can find a lot of valuable things that will be useful in the manufacture of tools, weapons and building shelters. It is also worth to engage in agriculture and hunting, which will provide the necessary food supplies.
Salvation dawn!
Just a few days ago, I watched two parts of the Kingdom, the Korean Joseon era zombie series. It’s very great, different from American zombies. The movie is not too fast, not too slow, but every frame is brutal and tinged with death. A few people, regardless of status, must cooperate to do two things: During the day, they plan, gather furniture and materials, build fences, make weapons, and deploy troops. At night, when the zombies wake up, they come over and start fighting with the zombies. And they could only breathe a sigh of relief when dawn appeared.
That vicious circle naturally reminds me of Pixel Survival Game 3, a mobile pixel game of the survival genre that I played not too long ago. The main character in this game also has to work hard during the day to collect many useful things, and in the evening, he struggles to fight with a bunch of hungry monsters. Everything goes on and on until you can’t hold it any longer. If you are interested in this game genre, download and play Pixel Survival Game 3 right away.
Gameplay
Similar to the previous installments of the series, your only goal in Pixel Survival Game 3 is to survive as many days as possible. When the night comes, everything changes and becomes scary when many hungry monsters are trying to devour you. In the game, they are called Hunger. To survive the darkness and this horde of ferocious Hunger that eat nothing, you must prepare well from dawn. The sun shone all around, making the Hunger not dare to step out of their hiding place. Take this opportunity, you must hurry to collect as many materials and items as possible. They can be small self-defense weapons, can be a fire trap or a tool to bring back to upgrade existing weapons.
Daytime is an item collection war. The night is a battle for survival. You will have to run constantly, if you are unable to run anymore, you have to stop fighting monsters with your homemade weapons. Then set traps, entice them to come to the pit. In short, you have to do every possible way to stay alive until dawn comes.
The survival challenge in Pixel Survival Game 3 I must admit is very harsh. The monsters are not only increasing in quantity but also faster, more diverse, and appear from every corner. In order not to dead and lose the game, you must do your best to collect items from the first levels.
What do we do during the day?
Survival in Pixel Survival Game 3 has many layers of meaning. Not only survive from the monsters, but you also have to live the life of a normal person, which means that you must have food and weapons to survive. This means that during the day you have to do hundreds of things: planting fruit trees, riding horses, hunting, raising crops, processing food, agricultural products, and craft items from the farm and items found. You also need to tame some of the monsters you’ve just acquired so that they can help fight later, build a house on a deserted island to spend the day, collect materials, make weapons, make all kinds of traps, explore different lands on the island.
Besides, you can also search for treasures, then you can have money and enough tools to build a monumental base on the island to reduce fatigue in night battles.
Many of you say that playing this game is only worth playing at night, but I don’t think it’s true. The battle of the day is the premise for the ability to survive the night. When it’s morning, even the amount of work and difficulty of the character I think is even more than at night. There are many things to collect. After collecting, you have to process to get the finished product. So patiently do things one by one (but don’t spend too much time on less important things), and you will see the day go by very quickly.
Depending on the time, the priority of the player will be different. For example, at first, when the Hunger was few and easy to handle, you should focus on making basic weapons, raising crops to have food. Then when the monsters became more and more cunning, they started making traps and other advanced weapons, you should strengthen and expand the base to have shelter at night.
Features :
* Single player and online multiplayer with up to 4 players
* Fight together with your friends or FIGHT against your friends in PVP battle
* Adventure together in survival mode
* Fight side by side for treasure in Arena mode
* Raise pets
* Grow crops and animals
* Crafting items
* SURVIVE
Last words about Pixel Survival Game 3
A compact pixel survival game with too many things to do at the same time such as: B. Farming, hunting for objects, melee in the night. You should play Pixel Survival Game 3. It’s rare that a mobile game combines all in one that makes this amazing game so good.

How to Download and Install Pixel Survival Game 3?
First, click the download button, the APK file will be downloaded automatically.
Locate the downloaded APK file in your phone’s Downloads folder and open it to install.
Go to your mobile settings, click Security, then Unknown Resources.
Now open the app and enjoy.

How will you craft your house on the deserted island?
Will you survive alone? Or with a bunch of friends together?
How many different plants will you grow?
Do you want to ride a horse and race with friends?
How about raising some farm animals and monsters, and bring them for treasure finding?
…or do you just want to slay monsters.. and your friends?

Be part of an EPIC ADVENTURE in the world of Pixel Survival Game 3.
Because this is the island SURVIVAL game where you can FARM, BUILD, EXPLORE, COLLECT TREASURE, PVP, SURVIVE and MORE!

Build your base on a deserted island, farm crops and animals for food. Collect resources and craft items. Invite your friends to your world and show off your crafting skills. Ride horses together and explore the giant island!

Features
☠ Singleplayer and online multiplayer with up to 4 players
☠ Fight together with your friends, or FIGHT your friends in PVP combat
☠ Adventure together in survival mode
☠ Fight side by side in Arena mode for treasure
☠ Raise pets
☠ Farming crops and animals
☠ Item crafting
☠ SURVIVAL

Death comes a calling, be warned.

Deleting the game would delete game data. Please use “Cloud” from game options to secure your game data to your Google Play account.

Support
Are you having problems? Please contact support by emailing your problem to the provided email address at the bottom of this page or contact us in game by going to Options > Support.