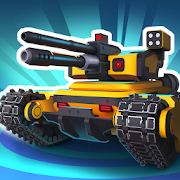 Tank ON 2 Jeep Hunter - Arcade Base Defender [1.22.19] updated on Wednesday August 5, 2020 is the Action for Android developed by AKPublish pty ltd

Description:
Tank ON 2 Jeep Hunter – tower defense style shooter, where players will continue to defend their bases against attacks on many of the enemy’s upcoming waves. They control the tower, which moves along rails perpendicular to the enemy’s attack vector. It is necessary to destroy the fast-approaching technology, to develop other automatic setup aids in combat and to use different bonuses for better results.

Tank ON 2 – is a 3D sequel to popular defender game with tanks and guns! Protect your base from the waves of enemies!
Control the turret which moves in front of your base, and can fire with different weapons of your choosing. The turret is protected by a force field, so it can ‘catch’ the enemy shells, preventing the damage to the base.
Use special weapons and buildings:
• Minigun
• Rocket launcher
• Tesla-gun
• Orbital Ion Cannon
• Energy Reactor and others!
For every enemy destroyed you get silver coins, and gold coins for the completing of missions, and protecting your base.
Spend the coins between missions to upgrade weapons and base!
Earn rewards for various achievements!