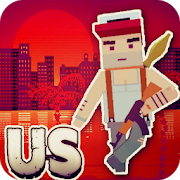 Unreal Sandbox [1.2.5] updated on Saturday May 30, 2020 is the Simulation for Android developed by Vision Games Inc

Description :
Unreal Sandbox – a dash sandbox simulator that traditionally gives players freedom of action and choice for development. You will also like a large selection of objects, devices, components, pre-built projects and everything else that attracts fans of creative activities in the company with other like-minded people. There are also weapons that help defend their position against neighbors who want to intrude on player private property. Well, the gradual development of the entire product and the filling up of the lists will not allow to delay the game for a long period of time.

Unreal Sandbox is an incredible new online voxel-style sandbox that has two modes for building:

The first mode – “Blocks” – you can build various buildings from blocks: houses, shops, a garage, anything you want.

The second “Gravity Gun” mode is when you are provided with many objects from different styles from which you can build cities. Using a gravity device, you can control these objects.

You can also save your buildings and share them with other players or friends.

This sandbox also has mechanisms and animals, many vehicles, various weapons for battles and shooting.
Unreal Sandbox has everything you need for a great game.

- fixed crashes from the server