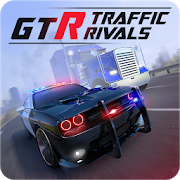 GTR Traffic Rivals is dedicated to spectacular and exciting races with an endless arcade mode. You will find great graphics, lots of cars, realistic physics of cars on the highway and several game modes, among which everyone will find the most suitable for themselves.

Traffic Modes:
★ For the first crash
Mode in which you can’t crash, a collision with someone else’s machine will lead to defeat.

★ Time mode
Time goes by, you need to hold out as long as possible on the highway traffic.

★ Time mode with the oncoming traffic
The most difficult mode. Lanes are so small, and cars are moving very fast, in addition time is running out!

★ Tournaments
Compete against other players, the winner is the one who gets more points in a minute of driving on the highway.

★ Contracts
Send your cars for mission (for example, borrow a car for the stars), and with some odds you will get a reward!

TRAFFIC FEATURES:
❂ 33 detailed supercars
The game has a large choice of machines of different brands, from Porsche, Ferrari to Subaru and Mustang;

❂ Racing career
Build a racer career on the highway, pass the levels, with each level it becomes more and more difficult to play;

❂ Police on the road
The police will appear at the most inopportune moment, you have to get away from the police as quickly as possible!

❂ Global Leaderboard
Fight for a place in the global results charts with other players;

❂ Nitro
Use car acceleration to quickly achieve the goal!

❂ Combo racing
Overtake as many cars as possible, he combo works under one condition – you must to drive very close to other cars.

DEAR USERS! We constantly read your feedbacks and suggestions, and try to respond to them on time. We are also pleased with the constructive suggestions for improving our games. All your suggestions we take into account and discuss.