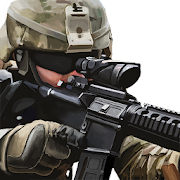 Code of War: Sniper Games Online [3.16.6] updated on Tuesday September 14, 2021 is the Action for Android developed by Extreme Developers

Epic Team battles, Brutal Deathmatches, Daily task, Weekly tournaments with players from around the world!
All you need is here.
Meet the new free online shooter Code of War.

Are you a fan of the good war shooting games? Your duty is here on a mobile device or tablet. Download now for free online shooter Code of War.
The enemy is approaching. You received the call for duty of saving the people. Now need to counter strike.

One of the best online Android multiplayer sniper experience gaming.
Jaw-dropping graphics and optimization, especially on low-performing devices.
Two teams fight for domination on the battlefield of Code of War Online! Spill heavy rain of bullets and grenades to the enemy soldiers Defeat your enemy – it’s time to blitz the target! Become the god of war gaming.

Code of War: online shooter game features:
* Commando battle modes for solo and team matches! Become the bullet panzer.
* Clans all around the world!
* Pull the trigger and shoot! Action adventure games where you create your own rules!
* Different Maps to try. Train map, Aztec temple, secret city and more. Survive on the military battlefield. Try sniper mode or tank rush. Choose tactics and find your enemy’s weak spots!
* More than 30 types guns, rifles, grenades, landmines, body armors and weapon skins! Face the battlefield in a complete set of weapons and protection. Play and unlock incredible gun weapons and gadgets.
* Perfect optimization, even on weak devices helps you to take control of the battlefield, deal with the conflict as a real war machine. High FPS helps you to become the best sniper in this action shooting game.
* Beautiful graphics! You have never seen so realistic guns in shooter games. Do you have a low performing device? Mobile or tablet? Don’t worry – in this Code of War: online shooter game you can choose different types of graphics for a comfort action game.
* Easy and intuitive modern control. Try comfort controls and becomes the best sniper on the war battlefield.

Game Modes:
* Team Deathmatch:
Teams battle against each other. The mission is to defeat the enemy team and show who’s the best online sniper player!

* Solo Deathmatch:
Free for all style. Defeat the other players all over the world as many times as you can. Get ready for some death combat action in our sniper shooting battlefield.

* Special Operations / Daily missions:
Shooting armed killers to survive and complete quests to the last one standing and become a legend. In this the best sniper shooter game you will be a real commando.
Come into this online game, shoot, upgrade your rank, get stars and daily prizes. Rank up and unlock more cool items and sniper games units.

*Join tournaments to win prizes and elevate your clan or play solo and become the best war sniper.
Code of war you can join world leaderboard shooter game.
– Prove your skills, compare kill records, find who is the best shooter around the world and beat him. Become the god of war gaming
– Share in socials that you are the best shooter of Code of War game
– Kill the most enemies to become the top sniper shooter.

Regular updates and new elements are waiting for you in online multiplayer shooting games.
This year’s best graphics and perfectly matched sounds will make you spend your time playing Cone of War Online shooting game!
Your duty is here on a mobile device or tablet.
Download now for free online shooter Code of War.
The enemy is approaching. You received the call for duty of saving the people. Now need to counter strike.
Play now for free.