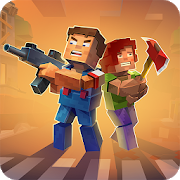 Pixel Combat: World of Guns [1.6] updated on Monday June 8, 2020 is the Action for Android developed by GS Games Studio

Do you like pixel and low poly shooters for survival? Then this game is for you! Interesting room shooter in the first person is waiting for you.

This game is a continuation of the legendary game Pixel Combat: Zombies Strike. We made a lot of new locations and prepared a new weapon, which was not in the previous version of the game.

You have to fight with hordes of zombies and get out alive from this difficult battle. Use all your experience and player skills. The game will be very dynamic and intense.

◀️ INSTALL TO GET FREE ▶️

- Ability to craft weapons and cartridges.

- A lot of new zombies and bosses.

We have significantly improved the new version of the game. We really hope that you will like it. We are waiting for comments and feedback in order to create even better games. In the autumn we are planning a new game, in which there will be multiplayer mode.