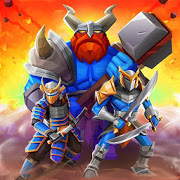 Empire Battle Simulator [1.0.60] updated on Sunday June 7, 2020 is the Strategy for Android developed by Rappid Studios

Choose your troops and place them on the battlefield to create your totally custom army! Do battle against bot armies or real players!

Three modes included:
– Challenges: Defeat bot troops in progressively harder single player challenges!
– Siege: Enter epic sieges where you will have to overcome wave after wave of massive bot armies.
– Arena: Test your army in the arena where you will compete with other players for a place in the leaderboards.

Each victory, in any mode, rewards you with chests and new troops to expand and upgrade your army!

Royal Battle Simulator improves on all aspects of gameplay based on your feedback and our observations.

Incredibly improved graphics, animations, audio and ragdoll physics!
An amazing village where you can see all your troops and create your armies!
Improved gameplay with troops that have special behaviour and allow for advanced tactics!
Upgrade and unlock troops by defeating challenges, sieges, or reaching certain trophy totals!
Trophy based matchmaking so that you are always matched with players of similar skill!
Fantastic units like the Cerberus and the Barbarian!