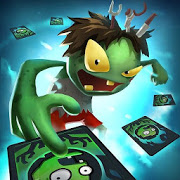 Zombie Friends Idle [Varies with device] updated on Wednesday June 10, 2020 is the Strategy for Android developed by Xhinobi Sdn. Bhd.

It is the zombie apocalypse – forget about saving the world, everyone is infected, including YOU! So, why not conquer the world instead and be the BIGGEST BOSS of this zombified sphere? And when we say the BIGGEST, it’s the BADDEST of them all.

This is why Zombie Friends is invented to let you establish your legion of zombie to outwit other zombies, which are less smart…well, at least prove them your legion is smarter, even some of the zombies’ brains are partially damaged, limbs are broken, and body is wounded. These don’t stop you from conquering empire to empire, from the Great Laut Faction to the Egyptian Zompire, or even the depths of the Dead Sea, battle up to make your legion a LEGEND!

Win Your Way Even When You’re Away
So much to win but no time to play? That’s what your zombie troops are for. Form a powerful team and pull off your winning strategy, your Zombie Friends will run the show for you, even when you’re inactive.

Team Up, Rack Up
Each card plays a part. Collect different cards to form your Zombie Friends and upgrade them to achieve greater power. Zombies are usually seen loafing around but definitely not your legion! Satisfy their hunger for adventure in Endless or Challenge mode to win rewards for higher winning chances!

Show Them What You’ve Got
Where there is a land, there is a conquest. Invade other empires and find the bosses because your Zombie Friends are audacious like that. Win against your enemies and turn them into your best friends to expand your legion and increase ranking.

More Artifacts, Stronger Attacks
Who doesn’t love bonuses? In Zombie Friends, you get tonnes of them! Whether they are weapons, skills, armors, and many more, you can get them all by creating unique artifacts. Each artifact can be upgraded to increase the potential of your zombies and this makes domination a piece of cake!

The fighting just gets bigger! Zombies around the School area are joining the Neighborhood to defend against other factions! Meet HEADMASTERS, TOP STUDENTS, BOTTOM STUDENTS basically, EVERYONE gang up and FIGHT!