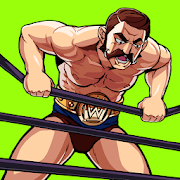 The Muscle Hustle: Slingshot Wrestling Game [2.4.6154] updated on Saturday December 17, 2022 is the Sports for Android developed by Foxglove Studios AB

Join the arena and get ready to strike!

You’ve never played a wrestling game like this before! Collect, train, level up and evolve hundreds of wrestlers. Combine the unique stats and abilities of your hyper heroes to build the perfect tag-team for each match and battle it out in extensive single player campaigns or the real-time PvP league.

The controls are simple, easy and fun; they might remind you of pool, marbles or pinball but with a RPG twist. If you are a fan of WWE, MMA, boxing games or simply like addictive action games where you don’t need to wait to progress, you will enjoy The Muscle Hustle: a wrestling game for everyone! Classic fighting moves and unique combos add exciting tactical and strategic depth.

Flick your finger and bounce a monster strike at the exactly the right spot to KO your rival, save your signature move for a massive bodyslam, or bank a shot for a multi-hit combo.

BUILD YOUR ROSTER
● Collect hundreds of unique fighters and build the best tag-team
● Train and evolve your heroes and unlock abilities like signature throws, holds and aerial attacks
● Manage their wrestling career path from rookie, to jobber, to pro, superstar, legend

EXTENSIVE SINGLE PLAYER CAMPAIGN
● Hundreds of levels on story mode to play, filled with unique challenges
● Throw chairs, set the ropes on fire, and jump off the top turnbuckle
● Hit the high scores on the leaderboards

- Free drafts on a schedule!

- Sell multiple coaches and wrestlers at once.

- Music players will no longer be interrupted by TMH!